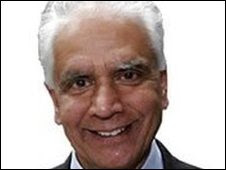 Bashir Ahmad took the oath in Urdu when he was elected in 2007
Scotland's first Muslim MSP Bashir Ahmad has died in Glasgow, aged 68.

First Minister Alex Salmond paid tribute saying he was the kindest most decent human being he had ever met.

After a successful business career, Mr Ahmad represented the SNP on Glasgow Council and the Scottish Parliament, where he took the oath in Urdu.

Born in India before partition, he had lived and worked in Glasgow for more than 35 years. He leaves a wife, five daughters and two sons.

Mr Salmond said: "Bashir made history by being the first Scots Asian MSP therefore giving the Scottish Parliament something indefinable.

"He made it representative of the whole country for the first time.

"He was the kindest most decent human being it has ever been my pleasure to meet. Bashir represented the best of Glasgow and the very best of Scotland

"And lastly, although he would have considered it to be first, he was the most patriotic of Scotsman.

"He was a credit to both his faith and to his country."

Deputy First Minister and fellow Glasgow MSP Nicola Sturgeon said: "Bashir Ahmad was an exceptional person, and I will miss him deeply.

"He made all of us immensely proud when he took his Holyrood seat wearing traditional Pakistani clothing, swearing in using both English and Urdu.

"Bashir represented the best of Glasgow and the very best of Scotland."

Steven Purcell, leader of Glasgow City Council said: "Both as a city councillor and an MSP, Bashir had no problem in working with colleagues across the parties in Glasgow's interest.

"He was a gentleman in all he did. I will miss him."

Scottish Conservative leader, Annabel Goldie added her own tribute: "Bashir Ahmed was a real gentleman, much liked and respected across the political spectrum.

"To be the first Asian Member of the Scottish Parliament was a real achievement, one of which he was rightly proud.

"Bashir will be sorely missed and we extend our deepest sympathies to his family and many friends."

"He was a decent and honourable gentleman and a good man to speak to.

"Parliament will miss him, but our thoughts are with his family at this time."

Mr Ahmad was a list MSP, which means there will be no need for a by-election to replace him.
Bashir Ahmad leaves a wife, five daughters and two sons - Scottish Parliament pic

He came to Scotland aged 21 and worked as a bus conductor and bus driver before buying his own shop.

He subsequently owned shops, restaurants and a hotel before retiring from business.

He was elected five times as president of the Pakistan Welfare Association.

In 1995 he founded Scots Asians for Independence, and he had been a member of the SNP's national executive committee since 1998.

In 2003 he was elected as councillor for the Pollokshields East ward of Glasgow City Council.

He was elected as an SNP member of the Scottish Parliament for the Glasgow region and Scotland's first and only Asian MSP at the 2007 election.

He was also a member of the Public Petitions Committee.

As well as his political interests Bashir was an active member of the Asian and Muslim communities in Glasgow attending a number of the committees of various mosques in the city. "

Rest in peace fellow traveller. Independence is gained through the work of giants beforehand.
Meek, humble and a gentleman. Winning by weight of argument not down beating others.
Posted by JuanKerr.com at 14:31

A decent man and a loss too the soon too be Independent Scottish nation.

Thanks for doing this Juan. Bashir was a truly lovely man with an obsessive passion for giving people mangoes!

My hope is that the likes of the Hootsman, put aside their vitriolic attacks on the Scottish Government to pay homage to a thoroughly decent chap, tomorrow.

My thoughts are with his family, sad loss for Scottish politics. RIP

Aye by all accounts he seemed a decent enough man, and with that a severe loss to the parliament.The nature of the beast these days only breeds duplicitous men and women. Lying spinning and misrepresenting th truth. It's like follow the leader in duplicity. Westminster and holyrood. A cancer that should be cut out of politics. Thie Gentleman above had no truck with this. people of honour like him are needed for all our sakes.To balance up "the force" between those who would sell us short for themselves and those who would guide us till we prospered.

I too hope the Scotsman puts asside it's hate for all things SNP and gives the man credit.

He came here at the age of 21 and in a hostile climate and he still prospered. Talk about peeing against the wind and winning!, no disrespect meant, just a hat tip to his fortitude and backbone.

Ahoy Tractor Stats and welcome aboard. Love your work,keep sticking it up im!

watch oot AM2' aboot..... must have popped in for his lyric sheet on the other post.

As given his views on our islamic neighbours that we have frequently heard, i doubt it was to offer his condolences.

Hello. This post is likeable, and your blog is very interesting, congratulations :-). I will add in my blogroll =)THANX FOR

MAKING SUCH A COOL BLOG