Death of a party 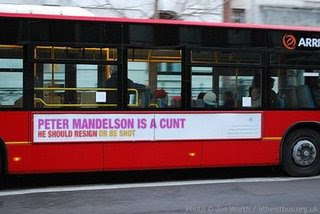 It is sad sometimes when once proud and respectable institutions such as Woolworth’s, demise. A once familiar scene from your childhood. Hanging about outside wondering what marvels your mum would bring back from the Pick n’ Mix.She was there because it held all of life staples and necessities. Run in the traditional manner and listening to it's core customers.

Could the demise of Woolworth’s be a euphemism for the death of the Labour party and traditional trade unionism?

A once proud organisation trading on simple values of right verses wrong. Eventually having it’s hey day and getting lost in the process. Unable to stock the core items of truth, justice and fairness. As it would impact on their other, more profitable markets of dishonesty, double dealing and procuring wealth for themselves and those close by. So up to their collective necks and used the the lifestyle of being somebody, they turn into the antithesis of what they could have been?

To find out if this is true you need to go back and look at the past of some of the key players in the modern Labour party and trade unionism.

Gordon Brown, Son of a minister who was well connected in the echelons of the Labour party of Scotland.

Charles Clarke, Ex Maoist revolutionary, whose claim to fame was during the power strikes he organised a campaign to waste electricity in public buildings! I bet the kids in the incubators were happy.

Having learned their craft in the gutter strife torn era of the 70’s they were not averse themselves to circumventing the odd law. Perhaps this explains their usage of terror legislation to counteract any protest movements? Knowing full well how mischievous they were themselves? Also history dictates protest precedes pole.

Lets go back too 1983. Mandelson, Brown and Blair. The bright young things. Educated, middleclass, hungry for power and any means to travel to it. Characters who are essentially without a party. Only interested in the allure of power and what it can achieve. They would be equally at home in the Tory party if their knowledge of historical political cycles had not dissuaded them.

They form an Alliance, knowing full well it’s who you know not what you know that counts. They each follow their individual remits. Mandelson to recruit bright young things and push for change from “jimmyism” , Tony to keep his nose clean as heir in waiting and Brown to do likewise. They were both his ponies and tickets. Mandelson knew he could not get there on personality or his sexuality so his only route was securing power and influence.

Lets speed up to 1994. The death of John Smith. A decent man and leader of the labour party. Found dead after suffering a heart attack whilst brushing teeth at circa 8 am. After having been visited by Mandelson 10 hour’s prior. The only Presbyterian obstacle too the plans of Mandelson, Brown and Blair. Then the sudden emergence of the relatively unknown Tony Blair as candidate for leader.

Had a once proud party been hijacked by forces behind the scenes? Willing to seize control by any means fair or foul? Who knows?

What is known is that a once proud party, founded on the principles of fairness, equality and solidarity for all. Has been taken over and turned into a far right wing machine(just look to its foundations to see the contrast) willing to remove peoples liberties, nose dive the economy, execute illegal wars and hold not one soul accountable. Utilising the Nazi technique of spin and misrepresentation as bernays prescribes. Preferring to enoble those who are complicit. Same goes for the trade union movement and it’s faux protest. Unfortunately all smoke and mirrors on their part, just the manual, finance and propaganda wing of the Labour party. Just biding their time for the trinkets from the people who promised their payback. “Toom Tabards” or empty suits as we Scots call them. Learning from their masters how too sound sympathetic and action the indefensible.

A party so in arrears on favours it is willing to bankrupt the country to hold onto it’s power. Just look at the jobs for the boy’s fiasco, which is the current IT projects bill. Starts at 2 billion and is currently running at 13 billion and rising. Or lets look at the commercial hiving of , of the foreign aid department, or the MOD and it’s contractor bills and privatisations. They’ve also been in power so long that their plans of being out the door before the bombshell of PFI has began to creep up on them.


What can the Tories offer England Scotland, wales or NI? Not much different unfortunately. The whole political machine and apathy of the voter stems from one thing mainly. Ingrained members, year after year promising the earth to secure their seats and doing nothing but nodding. So ingrained in westminster the opossite bench is not the enemy it is someone you faux jostle with and play squash with. Long forgetting the normal man in the street and the reason they are there. 30 years of bank bench living and expenses for flats they allready own(or left by mother....), members of their families paid for doing nothing and daughters property empires. Spending more time with accountants and expense lawyers or functions to secure directorships. No more should we accept this as a public.


The whole system needs a overhaul. 2 years only should any member serve and no usage of the time their to lobby or work for companies during or after. The term honourable Gentleman or Woman should be just that. There for the good of the people they serve not what they can gain and garner. Time to return it to a career of vocation not a career of politics. Time to ride out of town the ingrained MP's of all parties,mark the cards for the hangers on and grace and favour merchants and use our votes to return honour and dignity to the westminster system and all systems. Tick the box for no political levvy on your union dues or direct them to a party that supports a fairer level of play. Direct them too the SNP. And I can say that as a non member.

All parties need to change. People loyalty above party loyalty.
Posted by JuanKerr.com at 12:43

You'll never believe this but I used to have respect for Gordon Brown. Along with Robin Cook and John Smith I thought they had the good of Scotland in their hearts.

Ok, ok I know I was a fool, but what is it they say 'older and wiser'.

NO NO! WE ALL WERE SO FULL OF HOPE AFTER YEARS OF THATCHER WE WERE WILLING TO BELIEVE LABOUR WOULD DELIVER. They JUST DIDNT SAY WAIT TILL WEVE TAKEN CARE OF OURSELVES FIRST.
Have you noticed how the Labour goverment has a lot of success with rural locations ,desenters/objectors and then finding them dead? Just look at Dr kelly, Robin Cooke and John Smith.

Any obstacle seems to die in natural circumstances!

A certain Who song comes to mind...

all the word ver is kanckered for some reason. must be a google ting.

The more respnses the merrier!

Though responses would be better!

My betting would be on the foul rather than the fair means and so it goes on ....

throls - what can it mean? Don't tell me they're all coming out to comment on the LIT decision.