Broken Britain - A revolt against the political classes 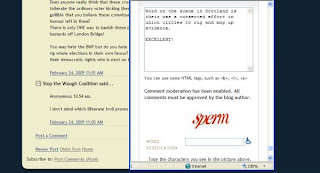 We live in a broken democracy. No doubt about it. Westminster and the devolved parliaments are split along lines of self-interest, party interest and member’s interests. No longer are they fit too govern, not one party is able to show the people of the UK that they are responsible and worthy.
They rely on the voter being cyclical in nature, biding their time whilst waiting for power and in the meantime have a very rewarding time. Different parties, same people. No longer “one of us” as they like to proclaim when they want your vote, but a self styled and self name creature all of it’s own called the “political class” , a ruling elite, separate from the plebs. There have been no bigger backers of this movement of separation than Brown Cameron and Clegg and their respective rich and Nuevo riche’ party members. Now in places of power and wishing to make a “purse out a sows ear” by grandstanding as a new and separate class.


The country is in the worst economic mess imaginable and no sign or confidence from the people of the UK that any of the above people or parties have the ability to lead us out of it or have simply given up trying or believing in their ability or resolve.

So what now? A fracture to parties such as the BNP? They are already trying to capitalise on the nations disaffections. Just as in the 1970’s their violence escalated into rampant knuckle dragging thuggery .

People need to protest or march on parliaments and tell the LOT of them that they are no longer fit for purpose, and we want new members of parliament. No longer will we accept the 20+ years ingrained slops such as Marshall, foulkse, Howe, Clark, etc. Who daily treat running the country as a big game of bluster and bluff. We need serious people for serious times and the current parties sadly just don’t have the people, intelligence or fortitude. Neither do their humbly compliant ranks of supporters. Look at the Labour party? A party once proud party and powerful voice for the working man or woman, comprised of passionate Working Class people, neutered, silenced and taken over by people who sought the separate class status above. Essentially Tories full of wind and pish and seeking a vehicle knowing full well the real Tory party was going to be in for a service for a while.

Protest, disrupt, clean out and start again. Take back your respective voice.
Begin the revolt against the political classes.
Posted by JuanKerr.com at 01:16

It is a institution now more than ever unfit for purpose, full of pompus people and vested interests. Disrupt every service they enjoy, gob on their goujons!