Gordon Brown 'could have saved HBOS without need for Lloyds merger' - But it doesn't help on disabling a nations ambition. 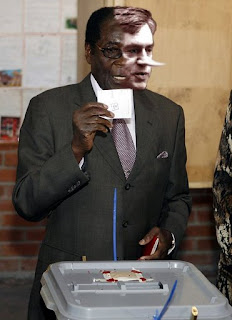 Pic Courtesy TractorStats - Keep the faith dude.
Gordon Brown could have saved HBOS without engineering the merger with Lloyds TSB that has brought the two banks to the brink of disaster, the Government's own financial watchdog has admitted.

Lord Turner of Ecchinswell, the chairman of the Financial Services Authority, suggested in an interview yesterday that HBOS could have been rescued with financial help from the Government, without the need for a takeover.

At the time of the merger - in which the Prime Minister personally intervened to ensure its passage - ministers repeatedly insisted that a union with Lloyds was the only way to save HBOS and the wider financial system from meltdown.

However, speaking to the BBC on Sunday, Lord Turner said: "There could have been a different way of directly supporting HBOS and keeping Lloyds separate."

Lord Turner also disclosed that the FSA and the Treasury had known HBOS was heading for the massive losses that have raised significant fears over the viability of the merged Lloyds Banking Group (LBG) since they were disclosed on Friday.

His remarks will increase the scrutiny on Mr Brown, who is facing mounting political pressure over his personal role in the crisis now gripping the British financial sector.

The newly formed LBG is 43 per cent owned by the taxpayer, and ministers are prepared take a majority shareholding in the bank if its situation continues to worsen when the stockmarket opens for business again today (MONDAY).

Investors in Lloyds TSB have already lost three-quarters of their money since the "shotgun wedding" of the two banks was announced.

On Friday, shares in the merged group fell by a third after it revealed that HBOS had lost more than £10 billion last year.

By contrast, the old Lloyds TSB business made a £1 billion profit.

Lord Turner said that the FSA's secret "stress testing" analysis of British banks had shown last October that HBOS would incur such large losses. "The losses which are being revealed this week are not huge surprises to the FSA," he said.

But the losses were a surprise to the City and have led to accusations from opposition parties and shareholders that Mr Brown has saddled the healthy Lloyds TSB with the loss-making HBOS to avoid a politically embarrassing bailout of the Edinburgh-based bank.

Mr Brown was took a personal role in the merger, assuring Sir Victor Blank, the Lloyds chairman, that competition rules would be set aside to allow the creation of the merged group, which has around 40 per cent of the retail banking market.

He said: "It was Gordon Brown's idea so nobody dared say to Gordon, 'Should we go ahead with your bright idea of persuading Lloyds to take over HBOS, couldn't be challenged?' and so this giant was set up and unfortunately it turns out that HBOS was a disastrous poison pill inside the new giant superstructure."

David Cameron, the Conservative leader, said that while he had supported it at the time, the merger is "now looking like a bad decision."

City investors are also furious. One leading shareholder said the merger is "increasingly looking like a disaster zone of a deal." The UK Shareholders Association called the merger "an absolute disgrace". The Tories last week accused Mr Brown of poor judgement for appointing Sir James Crosby, the former HBOS chief, to the FSA. Sir James quit last week amid allegations he had sacked an executive who tried to warn him over the risky lending policies that led to the near-collapse of HBOS last autumn.

A ComRes opinion poll yesterday put Labour 16 points behind the Tories, while a YouGov poll showed the Prime Minister's personal approval rating down 22 points since November - with only 31 per cent say he is doing a good job.

Government sources last night insisted that the merger had been necessary and in the interests of the financial system.

"The alternative would have been the collapse of HBOS meaning we would have had to intervene at much greater cost to the taxpayer," said a source.

Stephen Timms, the Financial Secretary to the Treasury rejected the Tory attacks on the merger as "complete opportunism", pointing out that Mr Cameron and Mr Clarke had voted in favour of waiving competition rules to allow the deal to proceed.

Mr Timms said: "HBOS was facing very difficult circumstances and if the merger hadn't taken place, then the situation would have been far worse."

Treasury sources insisted that all-out nationalisation of LBG is not on the agenda, but said that the Government is still willing to increase its stake in the bank.

Some of the State's holding in LBG is in the form of preference shares, special stock that pays a guaranteed return to the holder. Paying that "coupon" costs LBG around £500 million a year.

Ministers have offered to convert their preference shares into ordinary stock, ending the £500 million payment but increasing the State's holding in LBG to 50 per cent.

LBG chiefs have so far insisted they do not need to accept the deal, but Vince Cable, the Liberal Democrat Treasury spokesman, said that the bank was heading for "accidental nationalisation."

He said: "The Group may well have to come back for more capital from the Government, more shareholding, which will take it over the 50 per cent threshold."

As every coomenter apart from the ingrained unionsits said. The Merger was merely to put HBOS outwith Scottish ownership thus disabling any future ambitions to go our own way.

BROWN, STAY IN ENGLAND ALONG WITH YOUR SELLOUT SCOTTISH MP's and take the useless tosh you have wasting air in the Scottish parliament please.

Article courtesy the Independent, they are ....ARE WE?