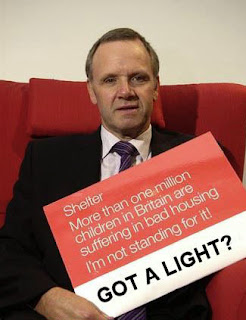 Fire-raiser Lord Watson told to do the honourable thing - Don't claim for lighters?

THE disgraced Labour politician Mike Watson yesterday faced calls to quit the House of Lords, as moves to expel convicted peers from parliament gathered pace.
The Liberal Democrats said Lord Watson, sentenced to 16 months in jail after he admitted wilful fire-raising at an Edinburgh hotel, should step aside with honour and no longer attend debates in the upper House.They plan to table amendments to imminent government proposals to tighten the rules on membership of the Lords in the wake of the "cash for amendments" scandal. Nine peers are now under suspicion, either for allegedly offering to change new laws in return for money, or in connection with jobs outside the Lords.David Heath, the Lib Dem MP 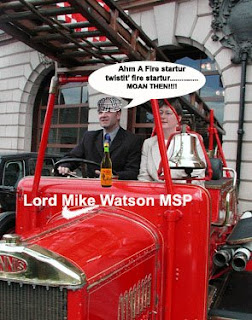 who shadows the leader of the Commons, said he wanted a retrospective ban on convicted peers – such as Lord Watson, Jeffrey Archer and Conrad Black – retaining their seats.The call came as it emerged that Lord Watson, an independent Labour peer, had claimed thousands of pounds in allowances after being released early from prison.He was freed on 23 May, 2006, and attended the Lords on 102 days that financial year, claiming £37,538. Since 2001, he has claimed £128,589 – £385 a day for 334 days in the chamber.In a Commons debate about making parliament more accountable, Mr Heath said: "We have as members of the House of Lords a convicted perjurer, a convicted fraudster and a convicted fire-raiser. What a rum crew we have making laws for this country."Mr Heath told The Scotsman yesterday: "There is a counter-argument that you can't make these things retrospective. In my view, the idea that somebody has broken the law and been imprisoned, but would have taken a different course of action had they known they would be suspended, is a pretty specious argument."I know that there are some legal opinions that suggest you can't make it retrospective, but for the Commons, that is as it is at the moment. If you have been convicted, then you are not eligible to take your seat. If you had been convicted previously, you would be disqualified."Asked if Lord Watson should not be free to continue his political career after serving his sentence, Mr Heath said: "There is rehabilitation and there is putting someone into parliament. I think there is rather a leap between the two. We have very clear rules with regard to the House of Commons. There is no clear reason why they shouldn't apply to the Lords as well."Labour back-bencher Ian Davidson, the MP for Glasgow South West, declined to comment directly on Lord Watson's case but said he backed the automatic exclusion of peers with a criminal record – regardless of when their crime had been committed. Alistair Carmichael, MP, the Lib Dems' Scottish affairs spokesman, said Lord Watson would have been unable to retake his MSP seat at Holyrood as rules ban people sentenced to a year or more in prison. He went on: "He started turning up here (in Westminster] because he had nowhere else to go. The House of Lords is the last refuge of the wilful fire-raiser. It rather highlights the inadequacies of the present set-up."He added: "If he had to face the electorate to get into the House of Lords, he wouldn't be sitting where he is today."The Ministry of Justice said it had yet to decide on rules to suspend or expel peers guilty of misconduct. But a spokesman said the government was looking at whether convicted peers could be suspended retrospectively. £384 allowances per day for shamed peerLORD Watson of Invergowrie became a peer in 1997, after eight years as a Labour MP.His Lords attendance only really took off after his release from prison. Before then, he also served as an MSP, and at times a Scottish Executive minister, between 1999 and 2005.He attended the Lords 334 times from April 2001 to March 2008, claiming £128,589 in allowances – an average of £384 per attendance. No receipts are required for claims. Some 231 of those visits followed his release from jail. He has made 17 speeches since then and voted on 246 occasions – about average for peers.
Posted by JuanKerr.com at 17:35

It's curtains for Watson.

I hear he has an asbestos contract......

Oh, Feel free to use these pictures on any blog you like I did them a coupla years ago when he got the nick. Saw the story and thought how appropriate.

(I've lifted this straight from my comment on the Hootsman)

Does anyone remember when Lord Watson was plain old 'Mike' a rather happy yet adequate MP for Glasgow Central?

He fought off a resurgent Alex Neill in 1989, and then when the boundaries were changed he went head to head with multi millionaire Mohammed Sarwar. for selection.
Sarwar's campaign was fraught with allegations of intimidation, corruption, court cases abounded, Labour were in melt down, oddly enough Sarwar's campaign manager was Margaret Curran.

Mike Watson, still a relatively young man, won the first selection process by one vote. Labour announced a second competition, which Sarwar won by a suspiciously large majority. Watson was bought off with Ermine, on the condition that he did not contest Sarwar's election as the House of Commons first Muslim MP.

I have some sympathy for the circumstances that drove Mike Watson to his current situation. When he returned to politics as an MSP for Cathcart, it was obvious that he was far brighter than most of his colleagues, he introduced the Protection of Wild Mammals bill as a member's bill, which the Scottish Parliament passed. This was before Westminster emulated the bill and banned Fox Hunting.

I suspect Watson is a tragic case. Who knows where he will finally end up.

AHOY Montague. Welcome too the blogopshere.

"Mike Watson, still a relatively young man, won the first selection process by one vote. Labour announced a second competition, which Sarwar won by a suspiciously large majority. Watson was bought off with Ermine, on the condition that he did not contest Sarwar's election as the House of Commons first Muslim MP."

You actually make him seem and sound human. What happened to him! THE LIEBOUR PARTY!

I have to admit that Mike Watson was one of the more approachable and helpful MPs but, sadly, got corrupted by the system which is now the norm rather than the exception in New Labour. What he was thinking when he tried to match the curtains is an absolute mystery to anyone who knew him.

Watson is an amature, he should have burnt the whole damn place down, have you seen the prices in that Hotel ?

yer a tough man spook. High standards for arsonists.
But seriously though and as Brownlie says, it's the system that corrupts. It can't be healthy yfor any party to have mp's 30 years in place. What do they know of the common mans struggle?